Tree-planting ceremony at MGS to celebrate the legacy of The Duke of Edinburgh, HRH Prince Philip 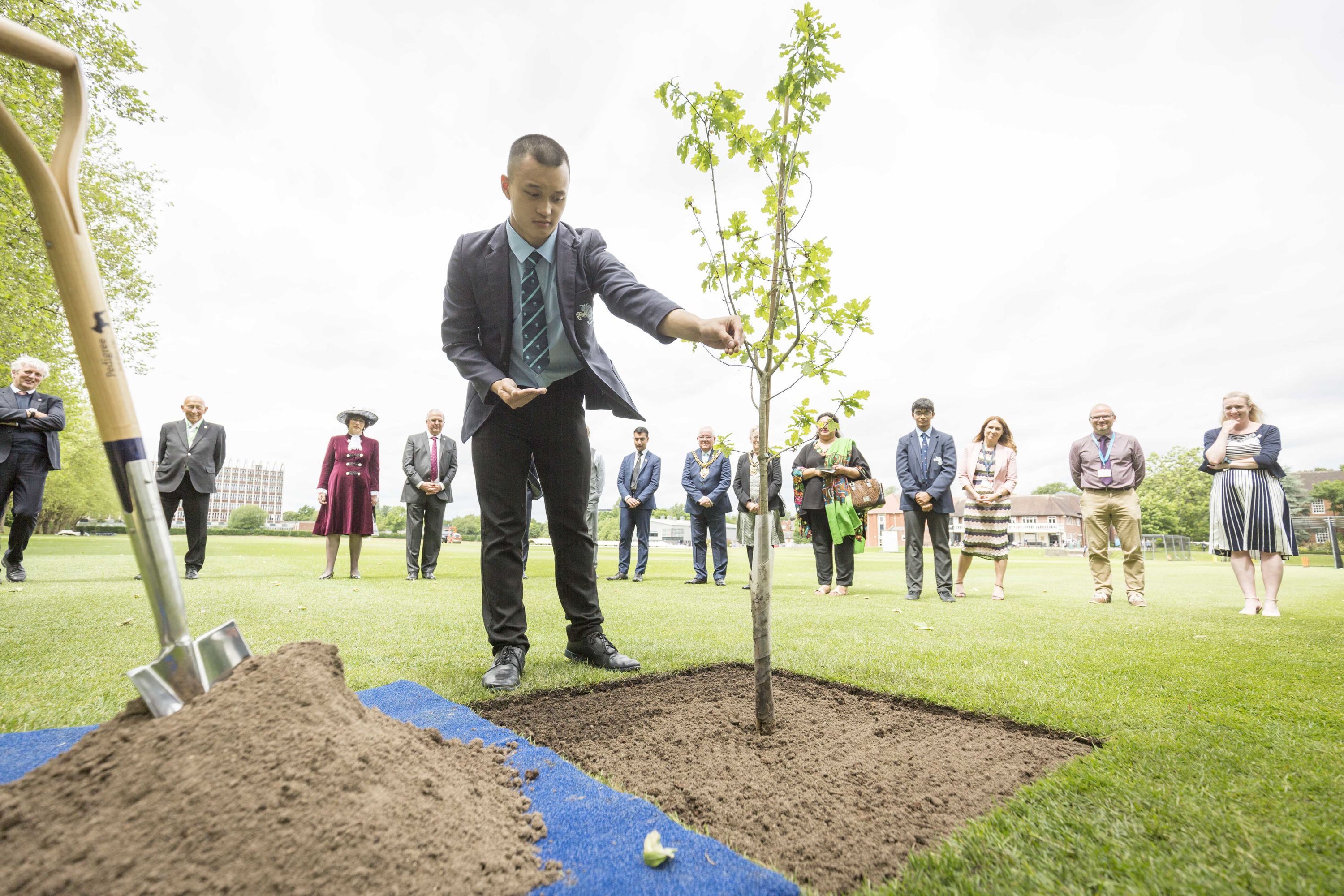 A Royal Oak tree has been planted in the grounds of The Manchester Grammar School to commemorate the life of The Duke of Edinburgh, HRH Prince Philip.

Today, 10 June 2021 - which would have been HRH Prince Philip’s 100th birthday – 11 trees were planted simultaneously at Duke of Edinburgh (DofE) Award centres across the 10 boroughs of Greater Manchester.

65 Blue Bell seeds were also scattered at the base of each tree to represent 65 years of The Duke of Edinburgh’s Award.

Dignitaries at today’s ceremony at The Manchester Grammar School (MGS) included The Lord Mayor of Manchester Tommy Judge and the Lady Mayoress Carol Judge, the High Sheriff of Manchester Diane Hawkins, who is a former chair of the MGS Parents’ Society and whose husband and two sons are alumni of MGS, and the Deputy Lieutenant of Manchester Atiha Chaudhry JP.

We were also delighted to welcome former MGS pupil Matthew Bolton - who was the School’s first-ever DofE Gold Award and who has now returned to MGS as a Religion and Philosophy teacher – and current pupils Lewis Wong, Henry Carolan, Ronak Maiti, Alex Howells and Akhil Kochhar.

The five boys are all currently part of MGS’s Duke of Edinburgh Award programme. Lewis scattered the seeds, Akhil was responsible for topping out the tree while Ronak watered the tree during the ceremony.

High Master, Dr Martin Boulton, said: “It is an incredible honour for us as a school, but also for everyone who lives and works in this community, that a tree has been planted in our grounds to commemorate the life, and legacy, of The Duke of Edinburgh.

“For more than 60 years, The Duke of Edinburgh Award scheme has provided countless young people with life-changing opportunities to have fun, make friends, improve their self-esteem, build their self-confidence and develop essential life skills.

“The tree will stand proudly in our grounds as a permanent and visible reminder of all that The Duke of Edinburgh Award scheme has achieved in the past six decades, and as the tree grows over the next 100 years, it will also inspire future generations of young people from across Manchester to take part.”

As part of the legacy celebrations, the Greater Manchester Lord Lieutenant’s office have secured sponsorship for 1,400 DofE places that will enable young people across Greater Manchester who may be marginalised due to social, economic or educational factors to take part in DofE schemes.

Helen Foster, the DofE Director for the North, said: “Young people are facing the toughest challenges, to their mental health and future prospects, and the DofE has never been more needed. By celebrating our Founder’s birthday and HRH’s exceptional legacy we celebrate the amazing achievements of every young person who is doing or done their DofE. I thank every organisation that has contributed to young people’s success and look forward to working in partnership to realise our new strategic ambition – to give one million more young people the opportunity to do their DofE in the UK by 2026.

“I’d also like to say a massive thank you to Sir Warren Smith, Lord Lieutenant of Greater Manchester for his generous support of young people and continued commitment to the DofE.”

The Lord-Lieutenant, Sir Warren Smith, said: “The Greater Manchester Lieutenancy are very pleased to be able to support this important initiative for young people. For over 60 years The Duke of Edinburgh’s Award scheme has created a unique opportunity for young people to enhance themselves and gain self-confidence in a way that will support them for the rest of their lives.”