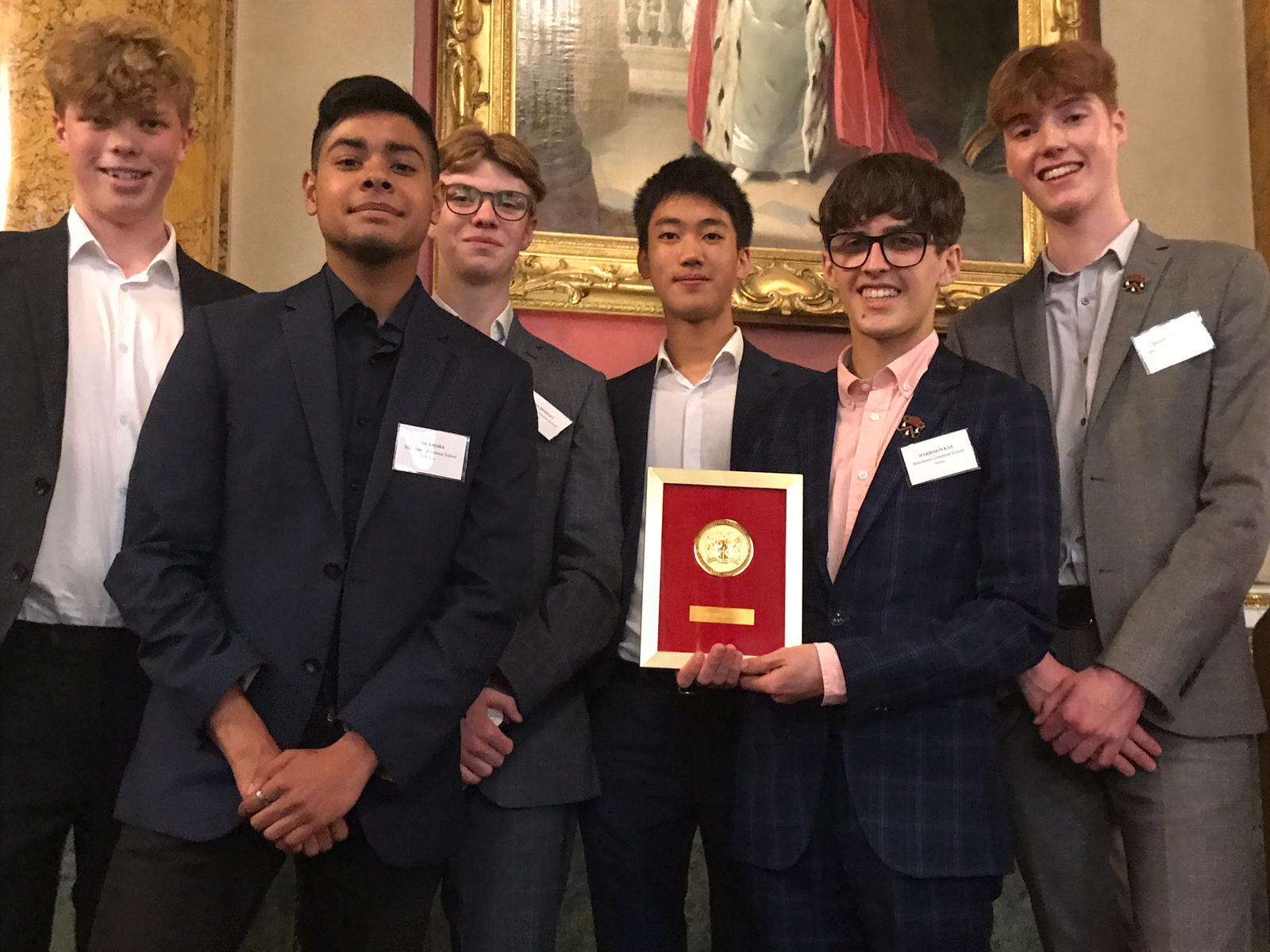 The Manchester Grammar School (MGS) has been awarded the first Goldsmiths’ Company Community Engagement Award, a national competition, the final of which took place on Tuesday 25th June 2019 at the magnificent Goldsmiths’ Hall.

The MGS team consisted of Harrison Kaye, Daniel Bourne, James Wang, Ben Dempsey, Adi Arora and Lawrence Abel who were recognised for the amazing work that they have done teaching English to rescued victims of human trafficking.

The project was set up in 2018 as a partnership between MGS, St Chrysostom's Church and Medaille Trust.

Each week, our boys work with vulnerable adults who have been rescued from traffickers and placed in a safe house. MGS boys work one-to-one to teach basic English skills to enable the adults to build a new life and gain employment.

Topics for the lessons begin with basic grammar, numbers 1-100 and using money, then advancing onto topics like filing an incident report at work.

School Captain Harrison Kaye said: “Putting ourselves in the position of teachers rather than students was daunting at first, but being a part of this project and seeing its impact week on week has been extremely gratifying and I’m sure the whole team would agree that it’s been a highlight of our time at MGS.

“We’ve faced a variety of challenges, namely learning how to communicate with someone when you don’t share any common language, and gained so many different skills in the process. To be recognised on a national platform in this way is incredible and I have no doubt that the project will only continue to grow in the future, especially with the backing from the Goldsmiths’ Company, and embed itself as one of the many core community action programmes at the school for generations to come.”

Pupils were asked to give a presentation on the programme in front of a panel of six judges, including Judith Cobham-Lowe OBE, a Liveryman and former Prime Warden 2017-2018 (equivalent to Chair) of the Goldsmiths’ Company. The judges praised the MGS team for their presentation and for the impact that the initiative has had on the local community and the vulnerable adults involved, as well as on the pupils themselves. The judges commented that MGS pupils had clearly benefitted from the learning and development opportunities provided during the programme.

Mrs Vivienne Horsfield, Assistant Head at MGS, with responsibility for the School's Charity and Outreach Programme, said: "I am delighted for the boys. To win this award is such an honour and I, and everybody at MGS, is so proud of this outstanding group of young men. They are passionate about this issue and their work on this project is making a tangible difference to those rescued from human trafficking, giving them the skills to rebuild their lives and get jobs. It's an inspiring project and to see, first hand, the difference it has made to these adults is a privilege.

"I would like to congratulate all the other entrants. It was humbling to see so many young people, in schools up and down the country, leading projects and initiatives that are making a real difference in their communities. It is important to recognise that young people are giving of their time and energy to help others. This is not always the narrative about young people and this award provides a platform to showcase their inspiring work."

The Goldsmiths’ Company Community Engagement Awards were launched this year (2019). The awards, which are student-led, celebrate the positive impact schools have through charitable and voluntary initiatives within their local communities.

Commenting on why the Goldsmiths’ Company had created the Awards, Judith said: “These activities are of vital importance to many people, but often go unrecognised. The Goldsmiths’ Company Community Engagement Award recognises the unsung heroes in schools up and down the country – young people who have given their time, energy and ideas to outstanding initiatives that support our local communities.”

The MGS team received a beautiful award, specially designed by the artist-craftsman Tom Fattorini, as well as a £3000 cash prize to support the continuation and expansion of the project.