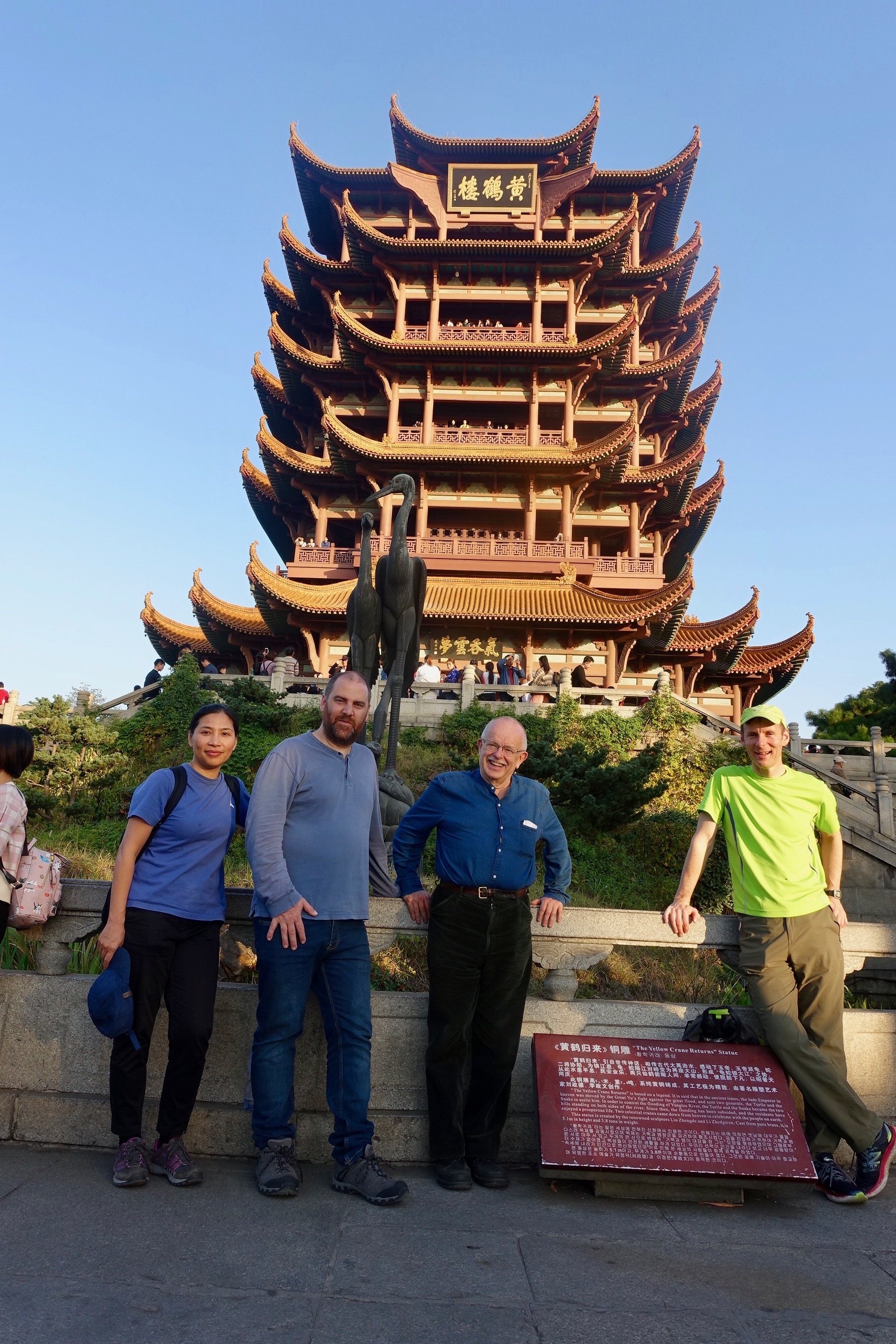 As a schoolboy, it always seemed more likely that I would one day travel to the moon than ever make the journey to China. In those days, China seemed very remote and anyway, during the turmoil of the Cultural Revolution, foreign visitors had not been welcome. Unsurprisingly then, when Mrs Lan suggested that I might like to spend a fortnight travelling through China, my curiosity was aroused. A half-hearted objection that I didn’t actually speak any Chinese was quickly dealt with, and almost before I knew it, I was on a flight to Beijing with 39 boys, attempting unsuccessfully to absorb Mr Hern’s copious notes on the various Chinese dynasties.

I should have realised from the thickness of Mr Hern’s guide to Chinese history that there would be a lot of it, but even this hadn’t prepared me for the sheer size of everything in China. As we were told, while our coach sat in traffic trying to get into the city centre, Beijing is an immense city of some 22 million people, with some eight ring roads, the seventh being nearly 1000km in circumference. Tiananmen Square at the heart of Beijing is a vast, open area, and extremely crowded. As we pushed our way through the masses of largely Chinese tourists, we would have quickly mislaid half the party, had we not all been wearing identical yellow T-shirts.

We passed the lengthy queues for the Mausoleum of Mao Zedong and headed for the entrance to the Forbidden City, the former Imperial Palace built some 600 hundred years ago, where a portrait of Chairman Mao still hangs above the arched entrance at the Gate of Heavenly Peace. Within the walls, layers of courtyards and gates unfold, revealing countless curiously-named, painted and exquisitely-ornamented pavilions, once home to the Emperor, bureaucrats, eunuchs, courtesans and the Imperial family. We admired the Hall of Supreme Harmony, looked longingly at the Palace of Tranquil Longevity, pondered at the Pavilion of Literary Profundity, passed through the Gate of Correct Conduct, revelled in the Palace of Prolonging Happiness, sought inspiration at the Hall of Mental Cultivation before lingering in the Garden of Benevolent Tranquillity, the names hinting at a lost world of ceremony, belief and tradition where the Emperor exercised his celestial mandate to rule.

Beijing clearly needs its parks as places where the citizens, especially the elderly, can meet, socialise, exercise and play. There are playgrounds designed specifically for older adults to stretch, workout and have fun. There are group t’ai chi sessions, and for those less passionate about physical exercise, board games and card games. Leaving our boys to play Jianzi or hacky sack, a traditional sport where players attempt to keep a weighted shuttlecock off the ground using their feet, knees and elbows, I edged over to a large group of greying singers who were enjoying themselves singing the popular songs of their youth.  If I were retired and Chinese, this is where I would spend my afternoons as part of an aging, singing community in a Beijing park.

We all carry mental images of the Great Wall, snaking its way across a landscape of wild, wooded hills, but again the sheer scale and ambition of the fortification took me by surprise. It is tall, solidly built of stone, and there is space on the ramparts for some eight people to walk abreast. In some sections, the walkway is extremely steep, requiring hand rails for walkers. Constructed in phases over 2500 years, the various sections of wall are over 13,000 miles in length, and at one stage, one quarter of the population of China were engaged in their construction. The huge infrastructure projects of modern China truly have a long pedigree, but none are more impressive than the Great Wall.

Whilst I am sure that there were disadvantages to being the Emperor of China, there were also many attractions, none more so than the Summer Palace set in the hills outside Beijing. The Emperor, his family, concubines and courtiers would retreat in summer to this vast area of ornamental gardens and parkland, amble - as we did - along half a mile of a shady, painted, covered walkway and watch mock sea battles on the lake from a marble boat. The landscape is studded with pagodas, pavilions and bridges, all carefully positioned to form a harmonious whole within a natural setting.

After so many massively impressive monuments reflecting an imperial past, it came as a relief to be escorted into an area of hutongs, a maze of narrow alleyways between single-storey houses. We squeezed our way through handcarts, bicycles and rickshaws until we came to the tea house where we were instructed in the ancient art of tea-drinking. The subtly-scented tea sampled from tiny cups tasted delightful and invigorated us for the challenge of 13 hours on the crowded overnight sleeper train to Xi’an.

After the immensity of Beijing, Xi’an feels somewhat more modest in scale. The ancient city walls are still intact and extraordinarily wide, thus allowing pedestrians and cyclists a wonderful, elevated, nine-mile tour of the city centre. Dusk began to fall as we cycled along the walls and our way became lit with red lanterns. Gradually, the city was transformed by thousands of lights illuminating the outlines of pagodas, watch-towers and gates, telescoping the centuries and creating the illusion of having been transported back into the middle ages.

As a former capital of the ruling dynasties for well over a thousand years, Xi’an houses an amazing cultural heritage, including the enormous, yet unexcavated, tomb of the first Qin emperor, guarded by some 8000 terra-cotta warriors, chariots and horses. Our impatient and constantly inquisitive Western way of thinking would doubtless wish to launch excavations immediately, yet the Chinese authorities are showing enormous, pragmatic, restraint by waiting until they have the expertise required to investigate and preserve such a unique site. Other considerations may be the rivers of deadly mercury said to surround the coffin, and the various traps set to deter trespassers.

After a long day of sightseeing, we were very ready to sit down and indulge our senses while watching the Tang Dynasty Show. Nothing had quite prepared me for this riot of colour, music, song and dance, as performers leapt and floated across the stage against fantastical backdrops of rivers, mountains, palaces and dramatic skyscapes. Despite the exotic setting, the tale felt strangely familiar: a simple but determined village girl dances her way to the Emperor’s attention, beats off the courtesans, rescues him with her love and loyalty, then finally takes his hand in marriage. Traditional Chinese instruments and a powerful percussion section provided an extra dimension to the melodies and lulled us into believing that we had now discovered the authentic heart of China. Maybe we had!

From Xi’an we flew south to Wuhan, sister city of Manchester and the home of Tiger, our tireless minder and fixer. After several nights in hotels sharing rooms, the boys would finally spend the weekend with a Chinese family in their home, making use of the useful phrases of gratitude they had been practising and hopefully following Mrs Lan’s extensive guide to avoiding cultural misunderstandings. However, we first visited our partner school, the Wuhan Foreign Languages School, where we enjoyed lessons in music and mask-making, before an excellent school lunch and a much-hyped football match.

History tells us that MGS never wins at football in Wuhan. Previous matches had been lost by a respectable margin, and participants for the trip had not been selected on their footballing ability. The fixture took place on wonderful, unfamiliar turf in intense sunshine. The teams lined up, national anthems were played, hands shaken and the ball kicked firmly into play. A score draw was perhaps the best we had hoped for, but Mr Coffey’s pre-match pep-talk clearly had had its effect, so that by half-time MGS were 3–0 ahead, a great scoreline for us, but potentially a diplomatic embarrassment. Substitutions were made to allow every MGS boy the opportunity of participating in this historic match, but still our opponents failed to level the score. Possibly they hadn’t reckoned with manager Coffey’s inspiring interval team talk, nor the real determination and talent evident in the MGS team.

Whilst victory on the playing field was ours, the prospect of performing in a combined gala concert of music and dance with other Wuhan schools was rather more daunting, especially as it was being held in our honour. Admittedly, as we had been sitting on the coach in traffic jams, we had all been learning the words and melody of a Chinese popular song: Wang Feng’s Fly Higher, a rousing anthem exhorting us all to better ourselves. In the concert, it proved an instant success, as did Mr Hern’s unforgettable, but possibly unseasonal, rendition of The 12 Days of Christmas. I had hoped to avoid contributing to the concert myself, with the excuse that I didn’t sing and I didn’t have an accordion in my luggage. The ever resourceful Tiger was quickly on his phone, and within hours had located an accordion for me to borrow. My medley of folk-tunes of the British Isles was surprisingly well received, particularly when everyone joined in the final chorus of Auld Lang Syne.

We all owe a huge debt of gratitude to Mrs Lan whose immaculate planning and vision made the whole trip possible. Without her infectious enthusiasm and understanding of Chinese culture, we could never have experienced even half of what we saw and did. Thanks too must go to Tiger for his immense efforts on our behalf in acquiring accommodation, tickets and transport for what must have been a fraction of the normal price. With Tiger’s eye on the clock, we always arrived just in time for the next event, never missing a boat or train, or needing to queue.

On leaving Wuhan, we travelled for six hours on the high-speed train down to Shanghai, another enormous, phenomenally-modern and vibrant city. The Oriental Pearl TV Tower stands at well over 1000ft tall in the city centre and allows spectacular views in all directions, especially downwards for those brave enough to walk, pirouette or sprawl on the glass floor. No trip is complete without some souvenir shopping, and China has souvenirs to suit every pocket and taste. We spent our last yuan on fake designer watches, toys, trinkets, scarfs, fans, paintings and green tea, trying to capture something of the elusive essence of China, before carrying it back to that rather remote island on the other side of the world.