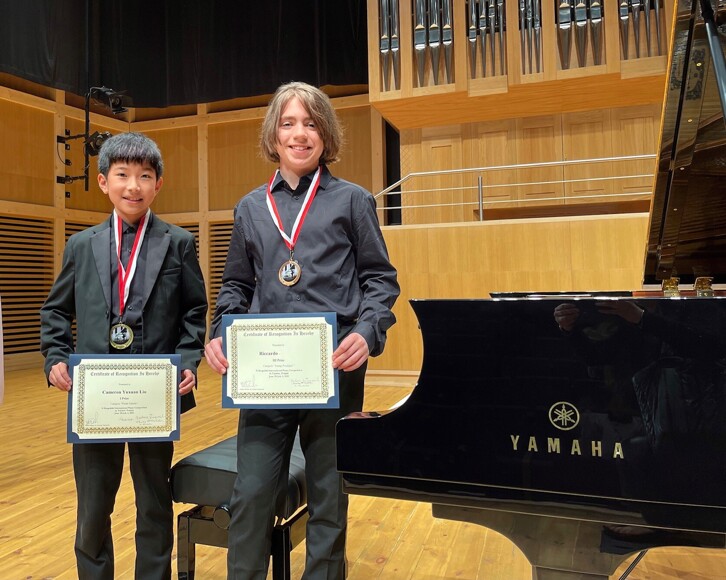 Congratulations to year 6 pupil Cameron L and year 9 pupil Riccardo S who were successful at an International Piano Competition in Poland.

Well done to Cameron who was awarded 1st Prize in the "Piano Talents" category which included performers aged up to 13 years old. Cameron has already achieved an ATCL Diploma in Music, and is a proficient musician of both Cello and Piano, and so this is another great achievement.

Cameron spoke about the multiple learning opportunities: "I really enjoyed my time in Poland. This was my second time going to this country. Last time, it was in the north, near Warsaw, where I won my category at the Chopin Music Festival and I played at the winner’s concert in Å»elazowa Wola, Chopin’s birthplace when I was eight years old. This time it was in the south, near Krakow. Each time I come here, I am very much impressed by the high standard and level of the competitors from each category. They come here very well prepared and play the best they can. To me, it is a great learning experience. Being in the younger category, listening to those more mature players there gave me so much inspiration and insight."

Cameron added: "I also made a lot of like-minded friends despite the language barrier. As well as the music, I got to experience the different culture, food, language and even the weather! I definitely prefer live music competitions to online ones because in online ones, you don’t get the sensational feeling of playing to a ‘real’ audience, you only play to the camera and one or two family members; whereas in a live competition, you usually have a whole audience which is very thrilling. Overall, I enjoyed the trip very much and look forward to performing and sharing my love of music to more people."

Well done to Riccardo who was awarded 3rd Prize in the "Young Prodigies" category which included performers aged up to 16 years old.

Riccardo spoke about his experiences of participating in a competition abroad: "Going abroad for a piano competition is always a great experience. It’s like a holiday with lots of piano playing integrated into it, making it extremely fun.  The competition itself consisted of playing a 25-minute recital for memory, in which I played pieces by a large variety of composers, such as Haydn, Debussy, (a couple others) and obviously Chopin, as Poland is his hometown".

He added: "Since I got a prize, I was also allowed to play at the winners’ concert, which was also great fun. The category in which I played was called “Young Prodigies” and had the age limit of 14 to 16. This meant that there were a lot of people older than me in my category, but even though this made the competition harder, I still managed to get a third prize. Overall, this trip was lots of fun, a place to make new friends who also have an interest in music, and a great opportunity to perform abroad and share my love for music with other people (and eat pierogi – a typical delicious polish dish!)."

These are tremendous achievements for both pupils, and a great opportunity for them to perform at an international competition with a live audience! 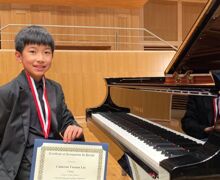 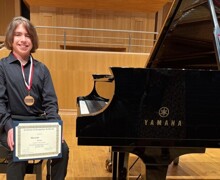